I almost forgot I had taken these pictures, these are me making soap by myself, heheheeh…I will take pics of me and William making some today, I am sure it will be far more interesting!!! Hahahahahah…..

The first thing you have to do, is get everything ready. I have  all my fragrance measured and color mixed before I start mixing as well as the molds being ready to go, 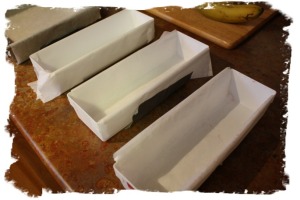 I use parchment paper lined plastic cutlery trays as molds, the parchment makes the soap easy to get out of the molds. This can be done when you are melting the oils together, but have it all set out, you will need to be ready to move fast once the soap has been cooked fully.

So the next step is to melt the oils that go into the soap, in this batch it is Olive Oil, Coconut oil, and Lard. You then mix it with the lye and water. Once the oils and the lye are mixed, you need to stir the mixture until it reaches trace. 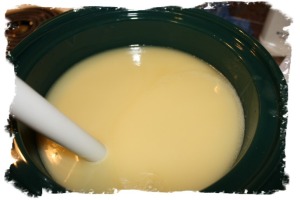 Trace is when the oils and the lye are totally mixed with no chance of separation. I like to get it to a thick trace, at least when I am making a colorless soap, like this one. I use a stick blender to mix it, it takes a lot less time to get it to the point of trace.

I seem to be having an issue with getting the soap to mix with the color properly, see Update on the Questionable soap…

So it is a trial and error production!!

Once the soap get close to trace it will leave a trail in the soap when you run the mixer above it and will be the consistency of pudding, or a muffin batter.

You will then know you are close, I usually mix it to a fairly thick trace, before I start to cook it, that way I know it is good and mixed together. You don’t want it to be under mixed.

Once the soap has reached trace I cover the soap and just walk away for a while, the soap will eventually start to volcano in the crock pot. You want it to reach this stage and volcano into the middle of itself. It will take anywhere from an hour to two hours to reach this point. Some people let it do this twice. My first batch really got hard faster when I did it twice, and the Olive oil makes the soap way softer. This batch ended up not 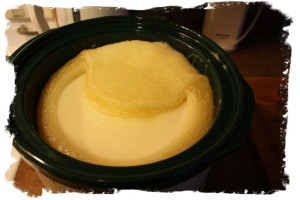 getting as hard as I hoped for because I only let it volcano one time. I will let todays batch volcano twice to be sure I get the results I want. Hot process soap, unlike Cold process can be used right away. I still let it sit for a few days before I use it though :) So once you are past the volcano stage, the soap will start to take on a consistency like mashed potatoes. This is good, you are nearly done!!

To test and see if it is really ready, take a wee bit of the soap out, rub it between your fingers, you 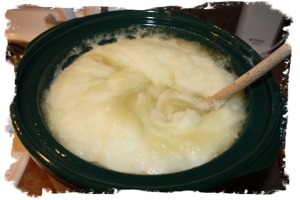 want a waxy consistency, and touch your tongue to it quickly, if it zaps you like an 8 volt battery when it touches your tongue, keep cooking, it’s not quite ready.  You are nearly ready to add your color and fragrances, you will have to move fast, and it is a good workout mixing them together at this stage, the soap will be thick and gloopy…this is good. You are getting close!!

Now you must get the soap into the mold fast!! It will be thick and hard to work with, I usually bang the mold on the counter when it is half full of soap, this will flatten the soap and get any of the air bubbles out. Fill the container to the wanted level, and bang it again. You can then smooth the top of the soap with a spatula or a knife.

Next, cover the soap with some plastic wrap and put it out of the way, so it has time to harden up and cool off. I never have a problem getting it out of the mold using the parchment paper, but if you have a mold where you can’t use the paper, you should be sure to spray it will with Pam or some other spray oil, and you can freeze it for a bit before taking it out of the mold. This helps alot… 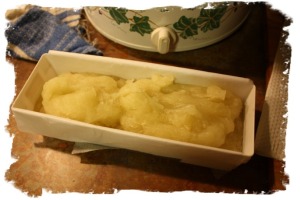 Once the soap has hardened up, you can remove it from the mold and slice them into desired sized bars. Like I said earlier, I usually let the soap sit for at least two days before using it, but it is totally fine to use right away. I just find it hardens a bit more if you let it sit, I put mine on a wire rack so the air can get all around the bars of soap. 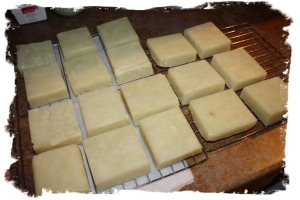 So there you go…you have soap!!! The only thing you will need to do now, it try not to get addicted to making it. I somedays don’t want to do anything else :) Cheers.

2 thoughts on “A soap making blog…”

Talk to me... Cancel reply

The Redneck Princess©2009-2021.
Unauthorized use and/or duplication of this material without express and written permission from me is strictly prohibited.

Excerpts and links may be used, provided that full and clear credit is given to The Redneck Princess with appropriate and specific direction to the original content.